This project has evolved into an orderable kit that easy to install.  Information on the kit is found at HHRV Lighting

Nuke-E wanted to improving the headlights of his Gen II Volvo.  He first performed headlight lens polishing choosing the 3M System.  Still not satisfied, Nuke-E decided to do a HID conversion similar to other vehicles he had done.  The following is excerpted form his original Forum post.

I took on a bigger challenge: I wanted bi-xenon HIDs, mounted in the low-beam projector location.  I also knew the Volvo Lighting Control Module would be out to get me if I installed a normal relay harness, and that we had a CAN-BUS data network.  Knowing that I might have issues, I wanted the whole thing to be reversible if it didn't turn out well.  I exchanged a few e-mails with Nate at TRS, who made a few suggestions.  Here's what I ended up with, basically $300 total from The Retrofit Source.

Compared to a lot of other retrofits, this one really is easy, once a few things are figured out, everything fits in through the twist-off low beam access cover, and everything electrical just plugs in.  I chose the Mini D2S projectors after attempting to fit the FX-Rs through the hole, while many retrofits require separating the front and back halves of the housing, I wasn't willing to do that here (and didn't think I needed to).  They are 2.5" lenses, just like the factory projectors, so from the outside no one would be able to tell anything had been done.

I still need to set up the LCM to leave the low beams on with the high beams (and fix one of the adjusters), but everything works, with no warnings from the LCM. 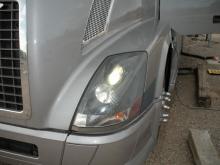 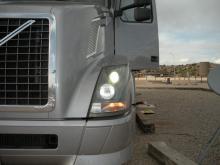 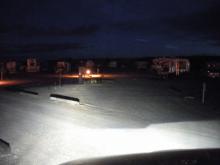 Notice in the next two pictures the sharp difference in how the lens looks depending on how high you are.  If you're below the bulb, it's very bright, but above you don't see much light, getting good light onto the pavement without causing glare for other drivers: 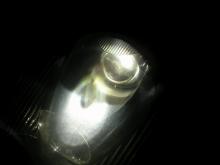 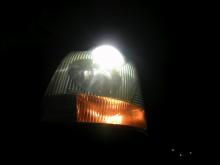 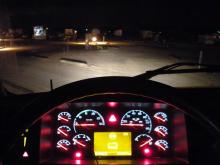 This picture shows a shot looking out with the old projectors 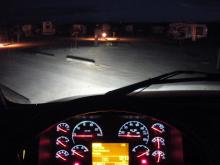 This picture shows the new projectors with the same camera.

It shows the adjuster problem: